In March 2009, the city of Burlington, Vermont held a mayoral election. Progressive Bob Kiss was elected, despite a 54% majority of voters expressing a preference for Democrat Andy Montroll over Kiss.[1][2][3] As a result of the surprise outcome of the election, Burlington voters narrowly voted to repeal IRV, reverting to their prior system of holding a runoff if no candidate receives over 40% of the vote. 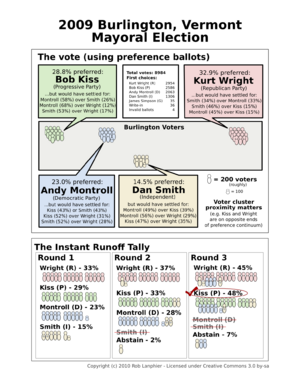 Here is a link to the SVG version in a few different forms:

This is the results of the Burlington, Vermont mayoral election of 2009.

Pairwise tallies for each of the candidates are available on the following subpages:

Below are the theoretical results of using different mechanisms other than IRV.

(see 2009 Burlington, Vermont Mayoral Election data for the raw ballots used to generate the results below).

The winner using the Copeland method is Montroll

The winner using the Plurality is Wright.

The results below were calculated using Plurality (a.k.a. First Past the Post). When using ballots that allow for ratings, the top rated candidate is chosen. If there is more than one candidate with the highest rating, the ballot is considered invalid and is not counted.

Retrieved from "https://electowiki.org/w/index.php?title=2009_Burlington_mayoral_election&oldid=12495"
Categories:
Cookies help us deliver our services. By using our services, you agree to our use of cookies.