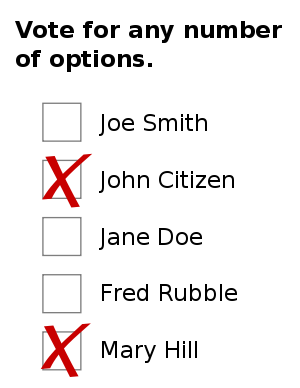 Approval voting has been implemented in municipal elections in the United States. Voters approved of the method in referendums in Fargo, North Dakota and St. Louis, Missouri.

Approval voting is used in many places over the years, and has seen some interest in the United States for municipal elections. Proposals to implement approval voting paased referendums in the following locations:

Usage in other municipalities is being promoted.[9]

Under approval voting, each voter in the electorate may vote for as many or as few candidates as the voter chooses. Each voter may vote for as many options as they wish (but at most once per option). This is equivalent to saying that each voter may "approve" or "disapprove" each option by voting or not voting for it The votes for each option are tallied, and the option with the most approval marks wins the election.

Approval voting is typically used for single-winner elections but can be extended to multiple winners. The system is sometimes described as a limited form of score voting, where the score that voters are allowed to express is extremely constrained: "acceptable" (with one point awarded to the candidate) or "not acceptable" (with no points awarded).

While independence of irrelevant alternatives usually implies a complete lack of a spoiler effect, in Approval voting the implication does not necessarily hold. If honest voters are expected to translate their preferences into an Approval ballot by making use of a particular rule, the rule may lead the election outcome to depend on what non-winning candidates were present. See implications of IIA.

Operations research has shown that the effectiveness of a policy and thereby a leader who sets several policies will be sigmoidally related to the level of approval associated with that policy or leader.[citation needed] There is an acceptance level below which effectiveness is very low and above which it is very high. More than one candidate may be in the effective region, or all candidates may be in the ineffective region. Approval voting attempts to ensure that the most-approved candidate is selected, maximizing the chance that the resulting policies will be effective.

Retrieved from "https://electowiki.org/w/index.php?title=Approval_voting&oldid=14713"
Categories:
Cookies help us deliver our services. By using our services, you agree to our use of cookies.