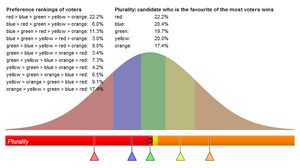 Systems that generally do well with center squeeze include Condorcet systems. Some people suggest that a center squeeze scenario could become an opportunity for one of the wings to use burial strategy and create an artificial Condorcet cycle. However, a Condorcet cycle has yet to to be documented in a real-world set of ranked ballots, and purposefully trying to inducing a cycle by voting for less-preferred candidates risks getting the less-preferred candidates elected.

Retrieved from "https://electowiki.org/w/index.php?title=Center_squeeze&oldid=15228"
Categories:
Cookies help us deliver our services. By using our services, you agree to our use of cookies.