Wikipedia has an article on:
Condorcet criterion 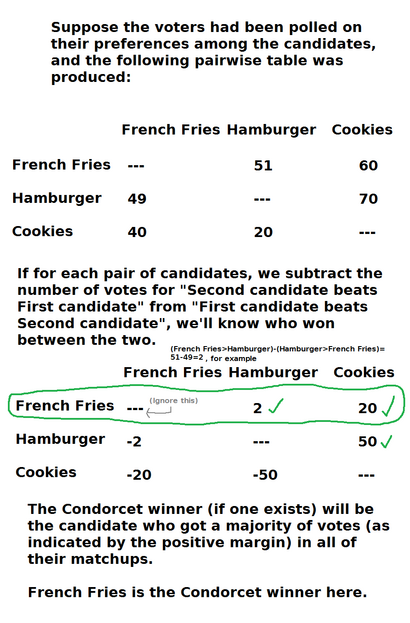 As an example, if there are 3 candidates, with head-to-head matchups indicating a 51% majority prefers the second candidate over the first, and a 43% plurality prefer the second over 37% preferring the third (with 20% of voters having no preference), then the second candidate gets more votes than their competitors in all matchups and so they are the Condorcet winner.

Mainly because of Condorcet's voting paradox, a beats-all winner will not always exist in a given set of votes. However, there will always be a smallest group of candidates such that more voters prefer anyone in the group over anyone outside of the group. If the beats-all winner exists, they will be the only candidate in this group, which is called the Smith set. Voting methods that always elect from the Smith set are known as "Smith-efficient".

Approval voting, Range voting, Borda count, plurality voting, and instant-runoff voting do not comply with the Condorcet Criterion. However, any voting method that collects enough information to detect pairwise preferences (i.e. scoring or ranking methods) can be "forced" to comply with the Condorcet criterion by automatically electing the Condorcet winner if one exists (or alternatively, eliminating all candidates not in the Smith Set) before doing anything else.

On a one-dimensional political spectrum, the beats-all winner will be at the position of the median voter. Example (also see https://i.stack.imgur.com/z4bjy.png):

Supposing this is the voter distribution, with 3 candidates Leftist, Centrist, Rightist who are each points on the left, center, and right of the distribution respectively, with all voters distributed from left to right, and voters on, for example, the left preferring Leftist>Centrist>Rightist, and the same holding vice versa. The Condorcet winner is the Centrist, because a majority prefer them over the "other side", for whichever side you look at.

The Condorcet winner/Smith set is a common equilibrium point in many voting methods. This is because a majority/plurality of voters have no incentive to deviate towards another candidate. Example for Approval voting:

Consider, for example, the following vote count of preferences with three candidates {A,B,C}:

In this case, B is preferred to A by 501 votes to 499, and B is preferred to C by 502 to 498, hence B is preferred to both A and C. So according to the Condorcet criteria, B should win. By contrast, according to the rules of IRV, B is ranked first by the fewest voters and is eliminated, and C wins with the transferred voted from B; in plurality voting A wins with the most first choices. Note that B and C are a mutual majority, so most majority rule-based methods would rule A out of winning. If A drops out, then B becomes the majority's 1st choice; so this is an example of IRV failing independence of irrelevant alternatives.

Range voting does not comply because it allows for the difference between 'rankings' to matter. E.g. 51 people might rate A at 100, and B at 90, while 49 people rate A at 0, and B at 100. Condorcet would consider this 51 people voting A>B, and 49 voting B>A, and A would win. Range voting would see this as A having support of 5100/100 = 51%, and B support of (51*90+49*100)/100 = 94.9%; range voting advocates would probably say that in this case the Condorcet winner is not the socially ideal winner. In general however, it is expected that the Condorcet winner (and Smith Set candidates in general) will almost always be very high-utility when compared to the utilitarian winner.

A is the only weak Condorcet winner here, as they tie 3 to 3 when compared to B1, B2, and B3, and each of the latter 3 candidates suffer at least one pairwise defeat, and since there is no regular Condorcet winner (since every candidate has at least one pairwise tie or defeat), by the above-proposed condition A must win. To show a failure of reversal symmetry, suppose the ballots are reversed:

Again A is the only weak CW here, with there being no regular CW, so the same condition holds that A must still win. To show a failure of clone immunity, suppose B2 and B3 drop out of the race:

Now both of A and B1 are weak CWs, because they both pairwise tie each other. In this particular example, since there is nothing that distinguishes either candidate from the other, the neutrality criterion requires that both A and B1 must have an equal probability of winning i.e. both must have a 50% chance. This means that removing clones of B1 increased B1's chances of winning (which were originally at 0%, since A was guaranteed to win earlier i.e. had a 100% chance of winning.) [1]

When M=1, and the method elects the candidate with the most first preferences when there are only two candidates, the generalization reduces to the ordinary Condorcet criterion.

Note that Bloc Ranked Pairs and Bloc Score voting (if scored methods are considered) would pass this criterion, though they are not proportional, and the latter is not a Condorcet method in the single-winner case. So it may make more sense to consider Schulze's criterion as one of several that a multi-winner method ought to pass to be considered a Condorcet multi-winner or Condorcet PR method, rather than the definitive one.

The Condorcet criterion can be abstractly modified to be "if the voting method would consider a candidate to be better than all other candidates when compared one-on-one, then it must consider that candidate better than all other candidates." Approval Voting and Score Voting, as well as traditional Condorcet methods pass this abstract version of the criterion, while IRV and STAR Voting don't (since they reduce to Plurality in the 2-candidate case and thus would need to always elect the traditional Condorcet winner in order to pass).[4]

It is rather common for pollsters to do head-to-head matchup polling to see who is likely to win in an FPTP general election. Condorcet polling can be done in a similar way, except more efficiently, by allowing polled voters to rank or rate the candidates.

One strategy common to most Condorcet methods is to prevent a candidate from being a Condorcet winner by burying them (giving them a pairwise defeat against another candidate).

The Condorcet criterion has been criticized for certain reasons. Here is one critique by FairVote, with some analysis:

If one candidate is preferred over another, it necessarily means the voter likes that candidate more than the other.

Condorcet winners are centrist by nature, regardless of the preferences of the electorate.

Not necessarily. If an electorate is 55% liberal, the Condorcet winner will be liberal, whereas if the electorate is 55% conservative, the CW will be conservative. They may lean towards the center to some degree (if the minority prefers them more than other candidates supported by the majority), but they do shift with regards to the voters' preferences.

Consider an election with three candidates: a strong liberal who commands between 40% to 50% of the vote, a moderate with about 10% to 15%, and a strong conservative between 40% and 50%. By being everyone’s second choice, the moderate will certainly be the Condorcet winner as long as neither of the two more extreme candidates earns a majority of the vote. If the electorate is moderate, then great – the Condorcet winner makes sense. But if the electorate mostly wants something to the left or right of the center, is it still the case that the moderate should always win? Wouldn’t the 80% to 90% of voters who lean clearly to one side prefer that their candidate have a nonzero chance of winning, as opposed to the impossibility of victory under Condorcet methods?

Looking to Burlington [...] The mayor was vulnerable, but Montroll only secured 22% of first choices and only 29% when the field was reduced to three, basically failing to make the case for his candidacy to enough people. If Montroll had won due to Condorcet voting being in place, the resulting controversy in Burlington would likely have been far louder than the outcry against Kiss’s IRV victory. Having a candidate win after being in last place when the field was reduced to three would have taken a lot of explaining to voters. They might have accepted the results; more likely, they would have challenged them, particularly if they understood that Democrats would suddenly be the dominant party in mayor’s race even when failing to finish in the top two.

This criticism can easily be averted if the voters on either side of the Democrats simply refuse to rank the Democrats above the other side.

Alternative definition of "beat" that is claimed to be more consistent with the preferences, intent and wishes of equal-top-ranking voters:

(Argument supporting that claim can be found at the Symmetrical ICT article.)

(X>Y) means the number of ballots voting X over Y.

(Y>X) means the number of ballots voting Y over X.

With this alternative definition of "beat", FBC and the Condorcet Criterion are compatible.

Outside of voting theory

Analogues to the Condorcet criterion have been proposed in non-voting contexts; it appears in many places when discussing how to aggregate ranked information. It has been used to discuss search engine rankings [5] and metasearch [6]. The concept of a Smith set ranking (which is sometimes referred to as the "extended/generalised Condorcet criterion") helps structure how the ranking of all options should be, rather than only the winner.