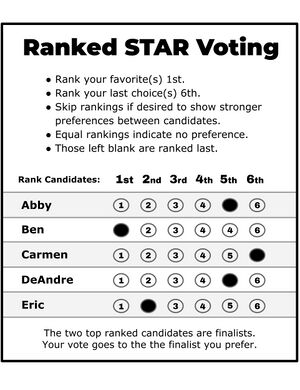 Ranked STAR voting is an electoral system for single-seat elections, though variations exist for multi-seat and multi-seat proportional representation elections. The name stands for Ranked "Score Then Automatic Runoff". Ranked STAR is mathematically the same as STAR Voting, but uses a ranked ballot.

Ranked STAR Voting was invented by Sara Wolk in 2017 as a variation on the STAR Voting method.

Voters rank candidates from 1st choice to 6th choice. Equal rankings can be given to indicate no preference, and voters may skip rankings to better differentiate between candidates if preferences are strong. Candidates left blank are assumed to be ranked last place, or 6th. Ballots may be labeled with numbered rankings, or may be given explicit labels such as Favorite, Good, Fine, Mediocre, Not Good, Worst.

Rankings are counted as star ratings, with 1st being worth 5 stars, 2nd being worth 4 stars, 3rd being worth 3 stars, etc. Ballots are then normalized, which ensures that full scale was used and that each voter ranked their favorite(s) 1st and that their lowest ranked candidate(s) 6th. The two candidates with the highest total points are selected as finalists, and then in the "automatic runoff", the finalist who is preferred on more ballots wins.

Many municipalities and countries around the world have adopted the Instant Runoff Voting version of Ranked Choice, which is easy to hand count but has serious drawbacks compared to most modern voting methods. Additionally, Ranked Choice Voting has the best name recognition of alternative voting methods used in many parts of the country and world. Ranked STAR Voting may be an easy upgrade for voting reformers when changing from a ranked ballot to a 5 star ballot is seen as a barrier to reform.

Despite the fact that STAR and Ranked STAR are essentially mathematically equivalent, Ranked STAR Voting may perform slightly differently due to the psychology of ranking vs rating. More study is needed to determine how voter psychology would impact voter behavior. Ranking may or may not encourage voters to rank more candidates, or it may lead to more clustering of rankings and worse differentiation based on strength of preference.

Where a commitment to a ranked ballot hasn't already been made, adopting traditional STAR Voting with a 5 star ballot is recommended because it's more transparent and intuitive.

Instant Runoff voting (commonly known in the USA as Ranked Choice Voting,) was invented as an easy to hand count method for ranked ballots, but the complex vote transfers can be opaque and result in counter-intutive and sideways outcomes. Instant Runoff Voting (IRV) suffers from vote-splitting and incentivizes lesser evil voting (Favorite Betrayal.) IRV puts strong underdog candidates at a disadvantage and fails to give each voter an Equally Weighted Vote. Not all rankings are counted, some ballots are exhausted and are not counted in the final round. Ranked STAR Voting gives voters a familiar ranked voting experience, but eliminates vote-splitting and has no exhausted ballots or wasted votes. Ranked STAR Voting ensures that each voter has an Equally Weighted Vote, the legal definition of One-Person-One-Vote and is compatible with statutes calling for either a win by plurality, or a win by majority.

Ranked STAR Voting's 1st-6th choice ballot allows for consistent ballot formatting on every race, regardless of the number of candidates, and the provisions allowing skipped rankings and equal rankings virtually eliminate spoiled or voided ballots due to voter error and decrease cognitive load in large fields of candidates.