Wikipedia has an article on:
STAR voting
STAR voting[1][2] is an electoral system for single-seat elections, though variations exist for multi-seat and multi-seat proportional representation elections. The name stands for "score then automatic runoff", referring to the fact that this system is a combination of score voting and runoff voting. It is a type of cardinal voting electoral system. It was previously known as score runoff voting (SRV). 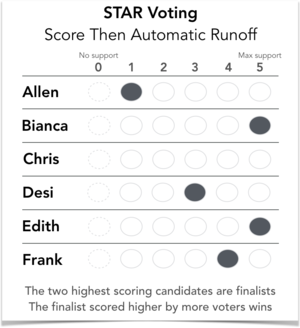