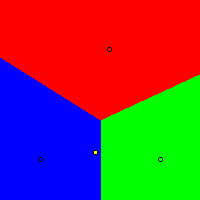 Ka-Ping Yee at a 2021 event hosted by The Center for Election Science. In this video, Yee explains several of the diagrams named after Yee, and discusses a broad range of electoral-reform topics.

The voters are usually modeled using a Gaussian ("bell curve") distribution, though their number, dispersion, and strategy can vary from one diagram to the next.[3] These properties do affect the output, but cannot be known from the image itself.

The diagrams can also be animated, quickly illustrating how the voting method would perform under many different scenarios (if the candidates held different sets of positions).[2][4]

While originally intended for displaying single-winner methods, they can be adapted to multi-winner methods by producing multiple diagrams for a given scenario.[5]

A video featuring Mark Frohnmayer describing how Yee diagrams are created, then showing animated versions that model different sets of candidates, for FPTP, IRV, Score, and STAR, then their divergence from the ideal single-voter case.[2][6]