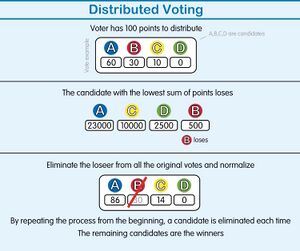 Each voter has 100 points to distribute among the candidates according to his preferences.

All candidates in the vote have 0 points by default.

By repeating the process from the beginning, a candidate is eliminate each time.

Given an initial vote of this type, with candidates A,B,C,D,E:

Normalization of the vote[edit | edit source]

e := value of the candidate eliminated from the vote.

In an electronic system it’s possible to divide by 100 all the points present in the initial votes, and use the following simplified formula throughout the counting process:

During counting, points can be represented in decimal form.

Using procedure 2 you get a vote that:

For the reasons indicated above, it’s strongly discouraged to use procedure 2.

To make the writing of the vote more comprehensible and simple, the voter can be left with almost complete freedom in the use of numerical values or only X.

Before the counting process, the grades will be normalized to 100-point grades, where the Xs are considered as equal weight values.

Examples of how a vote can be written by the voter and subsequently, in the counting, converted into 100 points:

The complexity in writing the vote adapts to the voter, and it’s also noted that, if 101 or 99 points are mistakenly distributed, the vote will still be valid.