Counted (which advocates Score voting) held a straw poll in the 10th Congressional District of Washington on June 30, 2018, after giving candidates a chance to speak in front of the voters. 38 people participated, though 4 were rejected as non-eligible voters.[1]

Ballots included three voting systems: Plurality/FPTP, Approval, and Score (0-5), so that voter behavior on the different types of ballots could be compared. 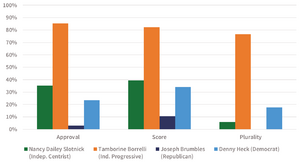 Under all three voting systems, the Independent Progressive candidate won by a large margin, and the Republican candidate came in last. The Democrat came in 2nd place under FPTP, but under Approval and Score, the Independent Centrist took 2nd place, beating the Democrat. (This was attributed to vote-splitting between the two independents in the plurality election.[2][3])

Raw scores for the 34 eligible voters:[2]

They published analyses of voter behavior:

One voter remarked “It looks like score voting is going to work out much better”.[3]