Wikipedia has an article on:
Condorcet loser criterion
Suppose the voters had been polled on their preferences among the candidates, and the following preferences in head-to-head matchups are produced between French Fries (FF), Hamburger (H), and Cookies (C) (FF>C shows the number of voters who prefer FF over C, for example):

The Condorcet loser (if one exists) will be the candidate who got a minority of votes (as indicated by the negative margin) in all of their head-to-head matchups.

Assume four candidates A, B, C and L with 3 voters with the following preferences:

The Condorcet loser is L, since every other candidate is preferred to him by 2 out of 3 voters.

There are several possibilities how the voters could translate their preference order into an approval ballot, i.e. where they set the threshold between approvals and disapprovals. For example, the first voter could approve (i) only A or (ii) A and B or (iii) A, B and L or (iv) all candidates or (v) none of them. Let's assume, that all voters approve three candidates and disapprove only the last one. The approval ballots would be:

Result: L is approved by all three voters, whereas the three other candidates are approved by only two voters. Thus, the Condorcet loser L is elected Approval winner.

This example shows that Majority Judgment violates the Condorcet loser criterion. Assume three candidates A, B and L and 3 voters with the following opinions:

The sorted ratings would be as follows:

This example shows that the Minimax method violates the Condorcet loser criterion. Assume four candidates A, B, C and L with 9 voters with the following preferences:

Since all preferences are strict rankings (no equals are present), all three Minimax methods (winning votes, margins and pairwise opposite) elect the same winners:

Here, Memphis has a plurality (42%) of the first preferences, so would be the winner under simple plurality voting. However, the majority (58%) of voters have Memphis as their fourth preference, and if two of the remaining three cities were not in the running to become the capital, Memphis would lose all of the contests 58–42. Hence, Memphis is the Condorcet loser.

This example shows that Range voting violates the Condorcet loser criterion. Assume two candidates A and L and 3 voters with the following opinions:

The total scores would be:

Thus, L would be the Condorcet loser.

Ranked pairs work by "locking in" strong victories, starting with the strongest, unless that would contradict an earlier lock. Assume that the Condorcet loser is X. For X to win, ranked pairs must lock a preference of X over some other candidate Y (for at least one Y) before it locks Y over X. But since X is the Condorcet loser, the victory of Y over X will be greater than that of X over Y, and therefore Y over X will be locked first, no matter what other candidate Y is. Therefore, X cannot win.

Note that it is very unlikely for a candidate with any significant amount of support to be a CL, even if they have significantly less support than other candidates, because they will still beat any candidates with negligible support i.e. Write-in candidates marked on only one ballot. Because of this, it is common to discuss the CL criterion when only looking at matchups between the major candidates. [1] 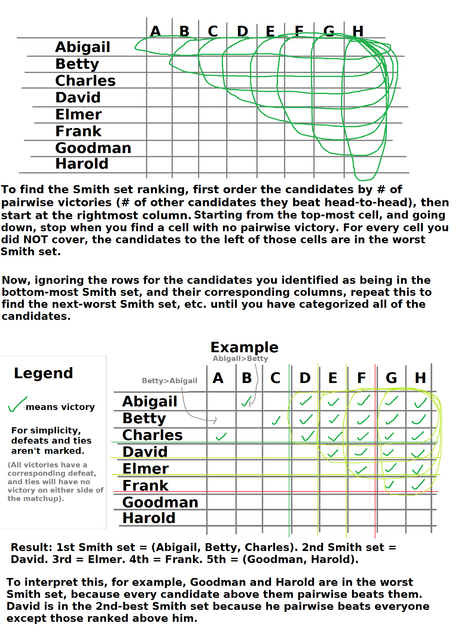 Retrieved from "https://electowiki.org/w/index.php?title=Condorcet_loser_criterion&oldid=14664"
Categories:
Cookies help us deliver our services. By using our services, you agree to our use of cookies.