The Green Party of Utah formed in 2017 and held a small election for Chairs and Treasurers using Score voting on a 0-9 scale.[1]

There were 34 voters, with 2 winners in each race. The winners were calculated using total score (not average), so blank votes counted as 0.

The winners were JT and MS, and this would have been the same if using average scores.

The winners were AP and EB, but EB beat JB by only 1 point, and JB would have won instead, if average scores had been used (since JB received one blank vote). 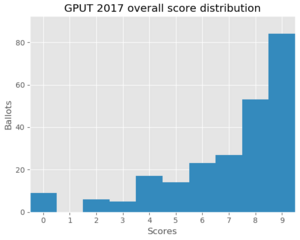 Overall score distribution for both races (including blanks, which scored as 0)

They had a positive experience overall, and intend to continue using Score voting:

We fully intend to utilize this system again next year, and would encourage other state parties to consider doing the same. I have heard concerns that it could be "too complicated". I feel that rating something on a scale of 1-10 (or 0-9 in this case) is a pretty basic concept. There was little to no confusion about how to do it. As far as complications tabulating the results... the spreadsheet did all of the dirty work. We just transposed the numbers from the ballot into the spreadsheet, and let the program do the math. We double-checked the results, and had a result very quickly.