A Condorcet ranking is an ordering of candidates such that:

Often the definition of a Condorcet ranking is generalized so that candidates with pairwise ties with each other are ranked equally i.e: 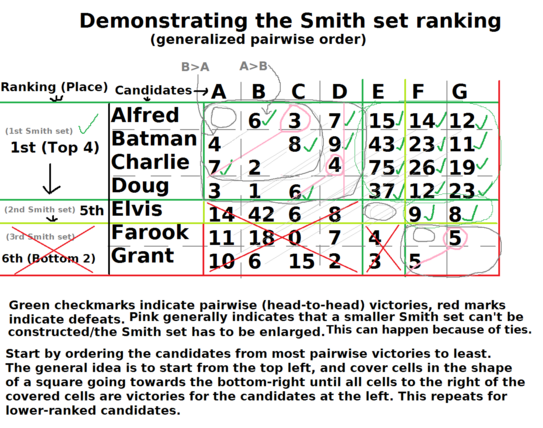 An example of finding the generalized Smith set ranking using the pairwise matrix.

When there is a Condorcet ranking (one doesn't always exist), the Smith ranking will be the same as the Condorcet ranking. There will always be at least one Smith ranking, and it is possible to have more than one (each of which will differ only on the order in which Smith or Smith loser candidates are ranked). The simplest way to find a Smith ranking is to find the Copeland ranking (the ranking of all candidates such that the candidates with the most (pairwise victories minus pairwise defeats) are ranked first, the candidates with the second-most (pairwise victories minus pairwise defeats) are ranked second, etc.)

Now, all cells to the right of the covered cells (the covered cells are all cells from the D>D cell to the E>E cell, which are the cells from the 5th cell in the top row to the 6th cell in the bottom row) show pairwise victories, so D and E are in the secondary Smith set. Going one cell down and one cell to the right, and again ignoring all previously covered cells, the top left cell of the now-covered cells is F>F. The only cell to its right shows a pairwise tie, so we automatically know that whichever candidate is in the row below F is also in the tertiary Smith set with F.

F and G are in the tertiary Smith set.

Thus, the generalized Smith set ranking is A=B=C>D=E>F=G, or (A, B, C) tied for 1st, (D, E) tied for 2nd, and (F, G) tied for 3rd place. In terms of pairwise comparisons, this is because 3 voters prefer (A, B, C) over all others (and at most 2 voters prefer any other candidates over (A, B, C)) but no smaller subset of (A, B, C) can say the same, 2 voters prefer (D, E) above all others when ignoring (A, B, C) (and at most 1 voter prefers other unignored candidates over (D, E)) but no smaller subset of (D, E) can say the same, and 1 voter prefers (F, G) above all others when ignoring (A, B, C, D, E) (and no voters prefer any other unignored candidates over (F, G)) but no smaller subset of (F, G) can say the same. Notice that when looking at the pairwise comparison table for the generalized Smith ranking that the consecutive Smith sets can essentially be seen by looking at which groups of candidates have pairwise victories over all other candidates when ignoring the pairwise matchups between candidates in the group.

One way to design the pairwise comparison table to show the generalized Smith set ranking would be to put all candidates in each consecutive Smith set on their own line, like so:

Smith set rankings can be given additional context by showing for each Smith set the weakest pairwise victory anyone in that Smith set has against anyone in a lower-ranked Smith set. So, for example, if there are 4 candidates, with 3 of them in a cycle and each of them having a 65%, 60%, and 55% victory respectively against the fourth candidate, then 55% could be used to describe the minimum strength of the candidates in the set against the lower-ranked candidate.

Smith or Condorcet rankings can be visualized in the following form:

With generalized Smith rankings in particular, some rows would have to be groups of candidates, rather than solely individual candidates. Hypothetical example:

Note that a variant of generalized Smith rankings can be created to address the unanimity/Pareto criterion. For example: