An explicit approval ballot for a Wikipedia Arbitration Committee election, which defaults to "Neutral" (abstention)

Explicit approval voting refers approval voting elections where the ballots allow for abstentions. To allow for this, an option is provided to explicitly state disapproval. So, the ballot will list Approve and Disapprove for each candidate (and may also have a Neutral option). Leaving a candidate without without "Approve" or "Disapprove" implies "Neutral" (and implies abstaining from voting). It is important to note, however, that this is not an example of Score Voting because it does not determine a winner by a simple sum of score values. 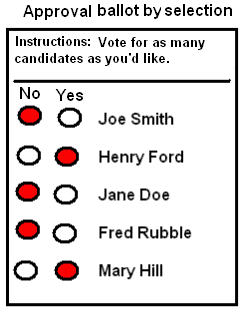 Many Wikimedia and Wikipedia elections using a form of explicit approval voting, where the winner is the candidate who has the highest approval among those who didn't abstain: A/(A+D)[1] In these Wikimedia elections, the voters were asked to choose "Support", "Oppose", or "Neutral" for every candidate. The winner is the candidate with the highest support percentage: the highest proportion of Support votes out of combined Support and Oppose votes = S/(S+O).

The Wikimedia Foundation has used this method for Board of Trustees and Funds Dissemination Committee elections in 2013, 2015, and 2017, after previously using Approval voting and Schulze method.

It has also been used for Steward elections since 2009 or earlier,[6] with the current rules electing all candidates that receive at least 30 votes in favor and at least 80% support.[7]

Wikipedia uses this in a non-binding way for Administrator nominations,[8] etc.

One main reason that use of the Schulze method was discontinued may have been the near-unanimous support that candidates receive, since the elections may not have been sufficiently competitive to justify a more complex, majority rule-based voting method.

Retrieved from "https://electowiki.org/w/index.php?title=Explicit_approval_voting&oldid=15039"
Categories:
Cookies help us deliver our services. By using our services, you agree to our use of cookies.