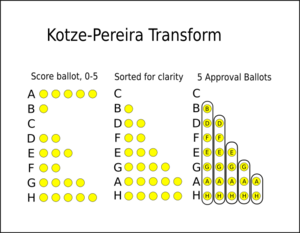 Visual representation of the KP-Tansform

The Kotze-Pereira transformation (KP transform) converts scored ballots into Approval ballots, which allows any Approval PR method to be run on scored ballots. Because the score winner will always have the most approvals after the transformation, a PR method that elects the approval winner in the single-winner case will also elect the score winner in the single-winner case when converted to a score method using the transformation. Score methods using this transformation are also generally satisfy Scale invariance (multiplying all score by a constant leaves the result unaffected), except when the change in score causes differences in surplus handling due to quotas being met or not met. The transformation was independently invented by Kotze in 2011[1] and Toby Pereira in 2015.[2] It was named by Forest Simmons in 2015.[3]

A voter whose scores are (with the max score being 10) A=10 B=6 C=4, would have their 1 ballot transformed into 0.4 ABC, 0.2 AB, and 0.4 A Approval ballots. This is because the lowest score they gave to any candidate is a 4 out of 10, which is 40% support, so a corresponding 40% portion of their ballot is treated as approving all candidates scored a 4/10 or higher (Candidates A, B, and C); the next-lowest score they gave was a 6/10, 60% support, but because 40% of the ballot was already converted into Approval ballots, only the remaining 60% - 40% = 20% portion is converted, and all candidates scored a 6 out of 10 or higher (Candidates A and B) are treated as approved in this 20% portion; finally, within the remaining 40% portion of the ballot, the next-lowest score the voter gave is a 10/10, so all candidates scored a 10 or higher (Candidate A) are considered approved on this portion of the ballot.

Replace any ballot which rates the C candidates with scores S1≥S2≥S3≥...≥SC by these C weighted approval (meaning with {0,1}-scores only) ballots

A "ballot with weight w" is to be interpreted the same as "w voters cast that ballot." This transform converts scores into approvals so that any method that uses approval ballots can be converted to a method that uses score ballots without having to individually define how to do so for each method.

Note that the Approval ballots yielded by the KP transform can be converted into ranked ballots by considering all approved candidates on a ballot as ranked co-1st, and all disapproved candidates as ranked co-equal last. With the above example of 0.4 ABC, 0.2 AB, and 0.4 A Approval ballots, this would converted into 0.4 A=B=C, 0.2 A=B(>C), and 0.4 A(>B=C) ranked ballots. This allows ranked PR methods to be done on rated ballots.

The KP-Transform turns this into 5 approval ballots.

The whole ballot formulation is particularly simple computationally. Given a Pandas dataframe S with columns representing candidates and rows representing voters the entries would encode the score of all the ballots. For a max score of K and an output set of approval ballots A.

Reweighted Range Voting is one example of a method where the Kotze-Pereira Transformation will provide Scale invariance. This example will use Jefferson RRV because it's marginally easier to work with, but it's basically the same with any divisors.

Let's say we have 5 candidates to elect and there are multiple A and B candidates, and we have the following approval ballots.

With KP, the initial ballots would be transformed to:

Using the "ranked KP transform" on Score ballots (converting them into Approval ballots which are then converted into ranked ballots, with approved candidates ranked 1st and all others last) and running this through Smith-efficient Condorcet methods yields a Smith set with only the candidates who originally had the most points i.e. the Score voting winner.

Something similar to the KP transform can be done using randomness: if a voter approves a candidate with a probability proportional to their utility from that candidate, then with probability approaching 1 with many voters, the candidate will have the same approval rating as they would if every voter had simply scored that candidate.

One way to visualize the KP transform is as follows: imagine that for each voter, 9 additional voters are added to the election, whose ballots are treated as "under the control of" that voter. If the voter decided to make 8 of the 10 ballots under their control approve their favorite candidate, while not doing anything with the remaining 2, then this would be equivalent to them giving that candidate an 8 out of 10 on a rated ballot. Thus, the KP transform helps with scale invariance.

The KP transform often improves or at least doesn't worsen a voting method that it is applied to, but this isn't always the case. For example, SMV depends on being able to spend an entire ballot even if it didn't give full support to the winner.

The connection that the KP transform shows between Approval and Score ballots can most clearly be seen when the Score ballots are set to a scale of 0 to 1 (with in-between decimals allowed), because a voter who gives a middling score to a candidate is seen to be giving them a fractional approval.

Retrieved from "https://electowiki.org/w/index.php?title=Kotze-Pereira_transformation&oldid=13760"
Categories:
Cookies help us deliver our services. By using our services, you agree to our use of cookies.