Wikipedia has an article on:
Plurality (voting) 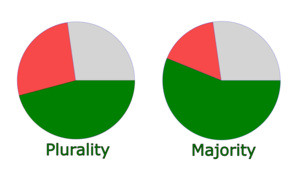 A plurality (or "relative majority") is the largest share of something. Depending on the definition used, a majority may or may not also be a plurality, though note that a plurality isn't always a majority. Some elections or types of votes require merely a plurality, while others require a runoff to produce a majority.

The term plurality is also often used to categorize voting methods that operate by looking mainly at voters' 1st choices. Choose-one FPTP voting and STV fall into this category, as do the plurality-runoff voting methods.

Several voting methods attempt to represent a majority, rather than only a plurality, of voters. Category:Graded Bucklin methods are prominent for this. Yet this can lead to situations where the plurality of voters suffer Later-no-harm violations to satisfy only slightly more voters; example:

If C doesn't run, then A wins by the majority criterion. But with C in the race, A is only a plurality's 1st choice, and C wins in Bucklin. Yet if A-top voters bullet vote, then they guarantee A wins in any voting method passing the Plurality criterion. Thus, attempting to avoid plurality-supported candidates can have odd effects. One way to get around this is to focus on majorities in the pairwise context, rather than absolute majorities, as this would show A to be the Condorcet winner in the above example.

Retrieved from "https://electowiki.org/w/index.php?title=Plurality&oldid=16480"
Categories:
Cookies help us deliver our services. By using our services, you agree to our use of cookies.