Wikipedia has an article on:
United States

The United States of America (also known as the USA or the US) is a big country, which seems to think it's the birthplace of democracy, but the Magna Carta predates George Washington and Thomas Jefferson by a few years. Not to mention all of those Greek statues. See Democracy

This wiki divides the contiguous lower 48 states of the USA into four regions based on major timezone. Each region includes all of the US states whose capitol is in the given timezone:

The text of this section is copied from https://en.wikipedia.org/w/index.php?title=Law_of_the_United_States&oldid=976780548

Wikipedia has an article on:
Law of the United States 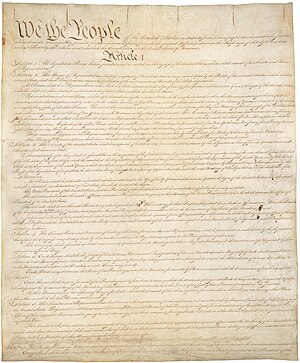 Federal law and treaties, so long as they are in accordance with the Constitution, preempt conflicting state and territorial laws in the 50 U.S. states and in the territories.[6] However, the scope of federal preemption is limited because the scope of federal power is not universal. In the dual-sovereign[7] system of American federalism (actually tripartite[8] because of the presence of Indian reservations), states are the plenary sovereigns, each with their own constitution, while the federal sovereign possesses only the limited supreme authority enumerated in the Constitution.[9] Indeed, states may grant their citizens broader rights than the federal Constitution as long as they do not infringe on any federal constitutional rights.[10][11] Thus, most U.S. law (especially the actual "living law" of contract, tort, property, criminal, and family law experienced by the majority of citizens on a day-to-day basis) consists primarily of state law, which can and does vary greatly from one state to the next.[12][13]

At both the federal and state levels, with the exception of the state of Louisiana, the law of the United States is largely derived from the common law system of English law, which was in force at the time of the American Revolutionary War.[14][15] However, American law has diverged greatly from its English ancestor both in terms of substance and procedure[16] and has incorporated a number of civil law innovations.

Wikipedia has an article on:
Political Eras of the United States

The United States Constitution is silent on the subject of political parties. George Washington (the first President of the United States) was not a member of any political party at the time of his election or throughout his tenure as president.[17][18] Furthermore, he hoped that political parties would not be formed, fearing conflict and stagnation, as outlined in his Farewell Address.[19]

This did not happen, and soon the "Federalist" and "Anti-Federalist" parties coalesced. Over the next several decades, the dominant parties shifted, but the by the late 19th century, the Democratic Party and the Republican Party came to dominate United States' politics. Historians have disagreed on the exact boundary between political eras, but often agree on five or six eras, which they refer to as "Party Systems"

The US is full of people that don't understand electoral systems. We hope to fix that here on electowiki. See Advocacy/United States to learn more about organizations that are trying to fix things.

Retrieved from "https://electowiki.org/w/index.php?title=United_States&oldid=15429"
Categories:
Cookies help us deliver our services. By using our services, you agree to our use of cookies.