From Electowiki
< User:Psephomancy
Jump to navigation Jump to search 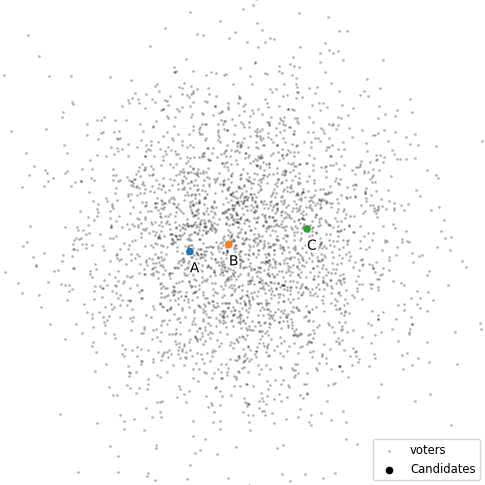 This is an example simulation of an election on a 2-dimensional political spectrum (such as the Political Compass, Nolan chart, Pournelle chart, etc.; it doesn't matter what the actual axes are.)

There are 3000 voters (black dots), 3 candidates (colored dots), and voters vote honestly, supporting the candidates who are most similar to them ideologically (nearest distance).

A wins under Instant-Runoff Voting ("Ranked-Choice Voting"), after B is eliminated for not having enough first-preference votes, leaving A and C. (A is slightly closer to the center, so more people in the center support A over C.)

First round is the same as plurality:

Second round after B is eliminated:

Exhaustive ballot behaves the same way, since it uses the same elimination rule as IRV, only held using multiple single-mark ballot runoffs instead of using a ranked ballot.

A wins under top-two runoff or an open primary. A and C have the most votes and proceed to the runoff. (None of the candidates gets over 50% in the first round.) A is slightly closer to the center, so more people in the center support A over C in the runoff.

First round is the same as plurality:

Second round after B is eliminated:

Contingent vote behaves the same way, except the runoff election is held automatically based on ranked ballots.

B also wins under Condorcet methods, as B would beat both A and C in head-to-head elections. 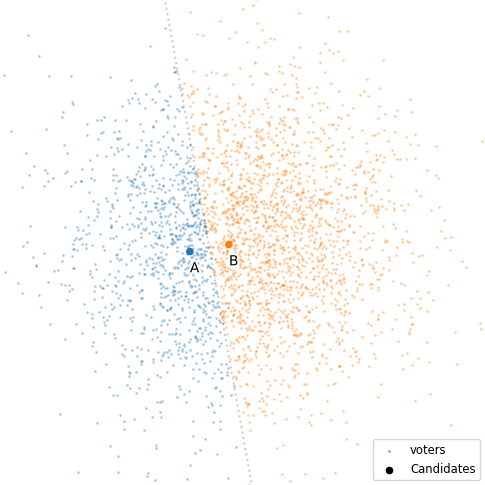 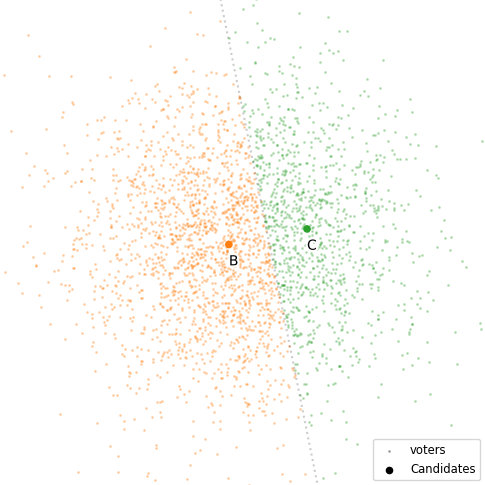 B also wins under STAR Voting. The first round is the same as Score, so the top-two winners are A and B (since A is slightly closer to the center than C):

B is then preferred over A by a 66% majority.

Retrieved from "https://electowiki.org/w/index.php?title=User:Psephomancy/2D_election_simulation_examples&oldid=6537"
Category:
Cookies help us deliver our services. By using our services, you agree to our use of cookies.