From Electowiki
< User:Sarawolk
Jump to navigation Jump to search

STAR voting is a voting method for single-seat and multi-winner elections. The name (an allusion to 5 star ratings) stands for "Score Then Automatic Runoff", referring to the fact that this system is a combination of Score Voting, to pick two finalists with the highest total scores, followed by a "automatic runoff" in which the finalist who is preferred on more ballots wins. It is a hybrid method which is both a type of cardinal voting and also a type of preference voting. 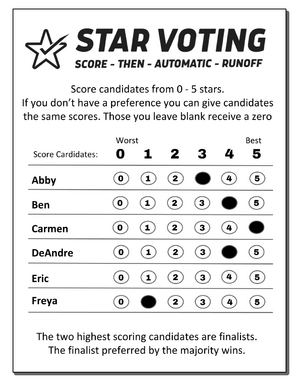 In STAR, voters score candidates from 0 to 5 stars, where 0 is "worst" and 5 is "best." Voters who have no preference may give candidates the same scores, and those left blank receive a 0.

The scores for each candidate are then summed, and the two highest-scoring candidates are selected as finalists who advance to an automatic runoff.

In the runoff round, each ballot is considered a vote for the finalist who was scored higher (preferred) on that ballot. Ballots which scored both finalists equally are considered a vote of "no preference" between those two. The finalist preferred by the majority wins.

For multi-winner or bloc elections the same process is used to determine the first winner. Then an additional runoff is conducted between the next two highest scoring candidates in which the winner is the finalist preferred by more voters. Additional runoffs are preformed as above until all seats are filled.

The 5 star ballot can also be used to perform a multi-winner proportional representation election. 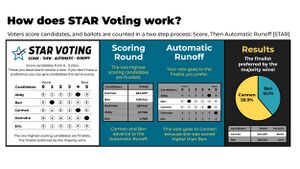 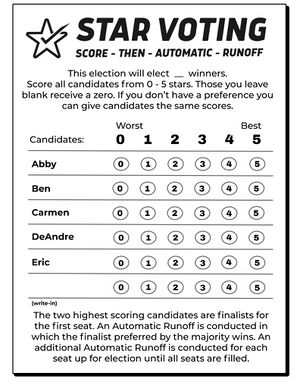 The concept was first proposed in October 2014 by Mark Frohnmayer, and was initially called score plus top two or score runoff voting (SRV). The runoff step was introduced in order to reduce strategic incentives in ordinary score voting, such as bullet voting and tactical maximization. Thus, STAR is intended to be a hybrid between (rated) score voting and (ranked) instant runoff voting.

The first movement to implement STAR Voting was led by the Equal Vote Coalition, centered in Eugene and Portland, Oregon. The movement now includes chapters around the state, as well as chapters in New York, Texas, North Carolina, and California. In July 2018, supporters submitted over 16,000 signatures for a ballot initiative in Lane County, OR, putting Measure 20-290 on the November 2018 ballot. This ballot measured failed, with 47.6% of voters voting yes, and 52.4% of voters voting no.

In 2019, the Multnomah County Democratic Party adopted STAR (single and multi-winner) for all internal elections.

In 2019 The Democratic Party of Oregon also adopted multi-winner STAR Voting for the party's 2020 Presidential Delegate Selection Elections. The delegate selection includes a modification in which the election results will then be used to determine a gender balanced winner list of candidates in which non-binary candidates are able to compete, but where the number of male and female winners will be balanced, as required by DNC Rules.

A 2020 ballot initiative for the city of Eugene (in which a 54% majority had supported the 2018 county initiative) is underway, as well as a second attempt at Lane County.

The Independent Party of Oregon will use STAR voting in their 2020 primary election.

Retrieved from "https://electowiki.org/w/index.php?title=User:Sarawolk/STAR_Voting&oldid=10508"
Category:
Cookies help us deliver our services. By using our services, you agree to our use of cookies.