Wikipedia has an article on:
Centrism 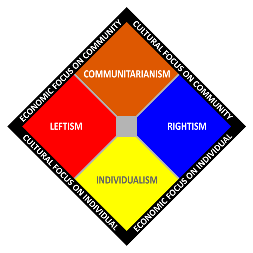 Centrism is a frequently used to to describe political candidates seeking the center of the political spectrum for a locality that they are seeking office. Additionally, some voters consider themselves to be "centrists" if they don't agree with any of the "extremist" candidates in their political sphere. English Wikipedia describes centrism this way: [1]

In politics, centrism is a political outlook or specific position that involves acceptance or support of a balance of a degree of social equality and a degree of social hierarchy, while opposing political changes which would result in a significant shift of society strongly to either the left or the right.[2]

Many editors of electowiki prefer to think of the political spectrum as a multi-dimensional entity. Few editors agree on the best abstract definition of this spectrum.[3]

"Centrist" is frequently used to describe the consensus candidate. This is an ambiguous term, however, because it is also frequently used to refer to the center of a given political spectrum or compass, and these are not necessarily the same concept.

For example, FairVote uses the term in reference to a Condorcet winner, arguing that it's good that IRV doesn't always elect the CW:

Condorcet winners are centrist by nature, regardless of the preferences of the electorate. ... So choosing the centrist candidate every time is just falling into the fallacy of the middle ground.

(The same concepts also apply to the utilitarian winner. In most real-world elections, the two winners are the same candidate.[4])

Retrieved from "https://electowiki.org/w/index.php?title=Centrism&oldid=15755"
Categories:
Cookies help us deliver our services. By using our services, you agree to our use of cookies.