Distributed Multi-Voting (DMV) is a Single-Winner and Multi-Winner voting system.

This voting method consists of evaluating all possible elections (subset of candidates) to find out which candidate loses the most and then eliminate him; by repeating the procedure several times, 1 or more winners (candidates left) are obtained. 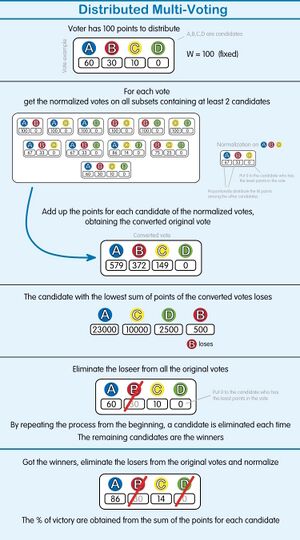 Each voter has 100 points to distribute among the candidates according to his preferences. All candidates in the vote have 0 points by default.

% of victory: got the winners, eliminate the losers from all the original votes and normalize. The % of victory are obtained from the sum of the points for each candidate.

In normalization for the % of victory, use the same formula without setting the candidate with the lowest score to 0.

If the candidates of the subset, in a certain vote, all have the same score different from 0 then, before normalization, don’t set the lowest score to 0.

The original vote of the voter through point 1 of the procedure is converted, and the vote obtained is in part of the type:

Meets Honesty criterion under the same assumptions as the Distributed Voting.

Under the same assumptions as the DV, this system also tries to satisfy the Perfect Honesty criterion, by applying a conversion of the vote which serves to drastically reduce the deviation from the honest one.

On average about 80% of the score, expressed in the tactical vote, is honest at the start of the counting, even if the voter used a tactical vote. A good representation of interests is also provided.

In cases [1] and [2] it’s noted that the addition of 1 point on B, left the score of A practically unchanged in the converted vote, but in case [2] it obtained 303 points for B (same speech observing the case [3] or even [5] ); this means that the voter has an interest in expressing his preference towards B. At the same time, the voter doesn’t even have the interest of giving his limited points to candidates he doesn’t really support (reduced Vote splitting) .

In general, starting from a vote, all the votes are obtained for each subset of the candidates (some normalization is used), and then they are added together obtaining the converted vote. Subsequently, the count on the converted votes is applied.

The following formula is used to normalize the votes:

Example of normalized voting for a subset of candidates:

By adding the converted votes, the candidate with the highest sum wins.

The converted votes are calculated, as in the Score Multi-Voting, on which the STAR count is then applied.

Retrieved from "https://electowiki.org/w/index.php?title=Distributed_Multi-Voting&oldid=12772"
Categories:
Cookies help us deliver our services. By using our services, you agree to our use of cookies.