From electowiki
Jump to navigation Jump to search

There is a great deal of flexibility in how EAR is implemented (e.g., the specific quota applied, how voter weights are spent, how exhausted ballots are interpreted, and how candidates are elected when there are "ties"). Therefore, EAR may be considered as a family of voting rules rather than one specific voting.

Unlike many other voting rules, EAR can be applied to ballots that include "indifferences" between candidates, i.e., voters are not forced to rank candidates as they can incorporate "ties" into their ballots.

According to the paper,

(4) EAR addresses a criticism of Tideman (2006):[3] “Suppose there are voters who would be members of a solid coalition except that they included an “extraneous” candidate, which is quickly eliminated among their top choices. These voters’ nearly solid support for the coalition counts for nothing which seems to me inappropriate.” We demonstrate the last flaw of QBS pointed out by Tideman in the explicit example below. EAR does not have this flaw.

Example 7 Consider the profile with 9 voters and where k [number of winners] = 3.

In the example, {e1, e2, e3} is the outcome of QBS. Although PSC is not violated for voters in {1, 2, 3} but the outcome appears to be unfair to them because they almost have a solid coalition. Since they form one-third of the electorate they may feel that they deserve that at least one candidate such as c1, c2 or c3 should be selected. In contrast, it was shown in Example 5 that EAR does not have this flaw and instead produces the outcome {e1, e2, c1}.

The example has two factions support two candidates each (e.g. one faction supports candidates X and Y, and another candidates W and Z), where X and W are almost exactly tied. In the original two-seat election, X wins and then the other winner must come from the WZ coalition, so Z wins. Then Z is raised on a X>Z ballot, which makes W win the first seat instead. Now the second winner must come from the other coalition, and so Y wins: raising Z makes Z lose.

A 2-winner example is included in Figure 2. 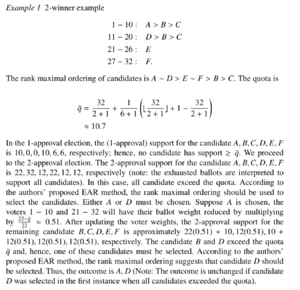 Retrieved from "https://electowiki.org/w/index.php?title=Expanding_Approvals_Rule&oldid=14911"
Categories:
Cookies help us deliver our services. By using our services, you agree to our use of cookies.