Single distributed vote (SDV) is an electoral system that extends the concept of Sequential proportional approval voting to Score voting ballots. It is general Cardinal voting system which reduces to Sequential proportional approval voting with approval voting ballots. Proposed by Keith Edmonds in 2020,[1] as a way to improve Reweighted Range Voting to be more in line with the desire to preserve vote weight. As such, it uses a similar but different vote conserving mechanism to Vote unitarity. It a natural extension of the Webster or Jefferson Method to a Multi-Member System. 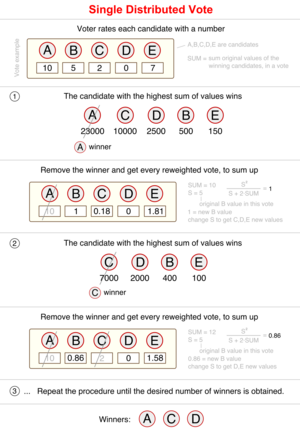 In a 5 winner race, the following example will show the progression of redistribution at each step for a single voter. This voter scored the winners 4 | 7 | 10 | 0 | 2 in the sequence in which they won. The ballot weight formula is

Note that the ballot weight is always a value in [0,1] and will sum to 1 across all candidates for each voter at all times. The score matrix is the original one and the winner is the same as the Score voting winner. In the next round, the ballot weight is redistributed to the next potential winners in proportion to the score given to them. For the second winner, this amount would be

At the end of this round the second winner has 7/15 of the ballot weight leaving 8 /15 with the first. Following the same formula the third winner has 10/32 of the ballot weight at the end of the third round. This is because 8/32 and 14/32 needed to be left with the first and second winners respectively. Note that later winners can receive more ballot weight if they are scored higher than prior winners. The fourth round has no effect since the voter gave a score of zero to that winner. In the final round, the winner receives 2/44 since the first three winners had to hold 8/44, 14/44 and 20/44 of the ballot weight. Another, example can be seen pictorially in the accompanying image.

The most general form of the reweighting of the score matix

A, B, C, D, and E are all constants to be determined. When no winners are elected for a voter we want no reweighting to be applied. This implies

A desirable property of a sequential system is to conserved vote power across rounds. The most literal interpretation of this concept is Vote unitarity. An alternative idea is that instead of spending the amount of ballot it is distributed between previous winners and potential winners. The distribution would follow the rule that the total is preserved. Whichever potential winner has the most distributed vote power available to them wins. This concept is maintained in SPAV and highest average party list systems. Each voter has their vote split between all their approved winners and the next potential one. The formula for their ballot weight is 1/(1+W). It is not clear if this conservation of ballot weight was what lead Thiele to propose SPAV.

To continue in the above derivation it would seem logical that when the score given is 0 we do not want the ballot to have any weight assigned to that candidate.

RRV gets around this because ballot weight is multiplied by the score so when the score is 0 there is no issue mathematically. RRV under the above conservation theory would assign ballot weight to those where the voter scored them 0. This is thought to be undesirable. It is a theory argument not really a practical one. RRV works it is just hard to motivate from theory. Even when ignoring the zero score candidates the ballot weight distributed to each candidate does not add to 1.

which is equal to

For simplicity, one can express the ratio of the constants as a single constant E/B = K giving the final form

This last undetermined constant, K, was discussed above in the variant section. The value of 2 would give Webster reweighting. This is a common debate when designing a system intended to produce something like Proportional representation.

The key is to consider what the natural threshold should be in specific scenarios. Consider a 2 seat race with two factions Red and Blue. Assume Red is the larger party so it will win one of the seats. What fraction of votes does Red need to win the second seat? This all depends on the system but they all come down to two options for threshold.

The 3/4 threshold systems are related to the common Monroe's method interpretation for multi-member systems. This would mean K is just a tuning parameter and 2 is the correct value to get it to line up with Hare Quotas.

This system is very similar to Reweighted Range Voting. The logic for the theoretical motivation is laid out above. While the concept of an underlying conserved ballot might be compelling theoretically it is worth considering the practical differences. While results are similar in most situation it is worth noting that Single distributed vote down-weights vote power the same or more than Reweighted Range Voting.