The Three Telos Model or "Triangle Political Map" or "Political Trichotomy" is a explanatory model of political ideology. It's a way to describe political beliefs based on the core axiom of the philosophy called a telos. The Three Telos Model is based on the concept of a ternary plot where the different underlying philosophies can be mixed but must sum up to the totality of the of the persons ideological position. This is a departure from the standard cartesian spaces such as the two-dimensional political spectrum.

The core concept is that there are three teloses or axiomatic end goals which are fundamentally incompatible with each other. Favoring any one telos comes at the expense of another. In this way the model is an attempt to show how differing balances of core values result in different ideological positions. 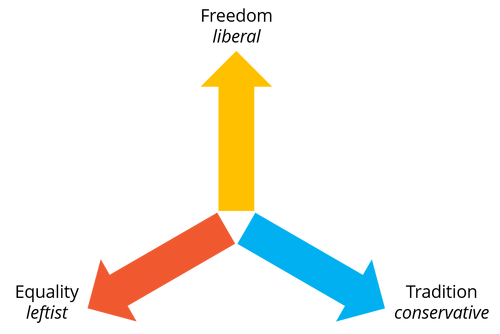 It can be thought of as being dual to Grid-Group Cultural Theory in the sense that each can be transformed in some way so that it ends up looking just like the other theory. There are some similarities in approach to Schwartz's Theory of Basic Human Values and Rokeach's Value Survey. The 8values test is also very similar since it uses 3 of the Teloses in a four dimensional cartesian space.

There are several slight variations of this. A sample of various implementations are in the following videos:

There is a lot of debate about what the best term to use for each of the three teloses is. It is also possible that there is no perfect word in English to describe each concept due to the nuance. The goal is that each is an independent and incompatible principle component of the space of values. This directly implies the necessity for the tradeoffs described by the metric space of the ternary plot.

It is intended to apply any time a group of individuals come together and co-operate in a society. A trade-off should emerge naturally in all such situations between the freedom of the individual verses the welfare of the group verses the strength of the society as a whole. Different people will weight these three attributes differently, but all of them are part of every grouping.

The concept of freedom is quite well defined in the liberal tradition which arose from the enlightenment. Some academics prefer to define this component as individualism or autonomy. Other academics prefer to define it by its inverse of authoritarianism. [5] All three components have an inverse where the person does not subscribe to the Telos at all. This would correspond to a whole side of the triangle since there are more ways to not follow a telos than there are to follow one.

The more common term for Equality in modern times is Equity. This clarifies that the Equality Telos is the desire for equality of outcome between individuals. The term for the group holding the ideal of Equity is often preferred to be labelled as Egalitarian instead of Leftist. However, the term Egalitarian has a wider and more conflicting set of use cases in literature than "Leftist".

The Tradition axis is likely the most controversial in definition because it is the only one which implies a temporal nature to the model. This is not intended to be identified with status quo conservatives[6] . It is intended to be aligned with the values of structure, order and stability. It is a desire to have traditions. While the desire to have traditions often implies the preservation of existing traditions it should be realized that people of this temperament are often easy to convince that a different tradition is better than an existing one as long as it leads to more structure, order and stability and will not cause turmoil in the transition. Many scholars would label the group who hold this telos as Hierarchists[7] to prevent confusion with the multiple ideologies labelled as Conservatism which have significant overlap with Liberalism.

Many familiar concepts can be expressed as a decomposed aspect of the three teloses. Each telos has a different meaning in different context[8] and the theory holds that each context should be able to be decomposed into three differing stances which align with each telos.

As in the two dimensional maps like the political compass, the differing ideologies can be put onto this map. 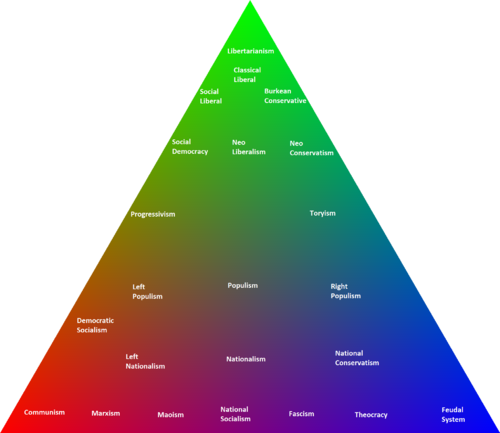 The use of a Cartesian space has been the standard practice for mapping ideology but there is no clear reason why this topology is preferrable.[16]. The Three Telos model is depicted as a 2 dimensional ternary plot where the three teloses Liberty, Equality, and Tradition must sum to a constant, K. Usually, this constant is represented as 1.0 or 100%. Because Liberty + Equality + Tradition = K for all people being graphed, any one variable is not independent of the others, so only two variables must be known to find a sample's point on the graph: for instance, Tradition must be equal to K − Liberty − Equality. Because the three numerical values cannot vary independently—there are only two degrees of freedom—it is possible to graph the combinations of all three variables in only two dimensions.

What is often called horseshoe theory claims that the extreme authoritarian economic left (Communism) is adjacent or close to extreme authoritarian economic right (neo-reactionism/fascism). This would imply a horse shaped political spectrum embedding in a 2D space. This concept has little to no academic traction but it does illustrate the problem which arises from a simple 1D political spectrum. National Socialism has had such an effect on modern politics that any explanatory model which fails accommodate both the Nationalism and the Socialism is clearly lacking. The Three Telos Model does not encounter such an issue as there can be many types of authoritarianism (illiberalism) on the lower edge from Egalitarianism to Traditionalism.

Political philosophers have argued that a good political ideology must also incorporate constraints between different desires[17]. For instance, from the liberal economic position, Milton Friedman advocated for the necessity of putting one of two desired values ahead of the other by stating "A society that puts equality before freedom will get neither. A society that puts freedom before equality will get a high degree of both". The implication of this being that both Equality and Freedom are desirable but they have fundamental incompatibilities. Constraints such as these can be expressed by changing the topology of the ideological space to make having full Equality and Freedom impossible in the model.

It may still be useful to represent political ideologies that violate the constraints and are practically untenable. Even if the ideology is in some way suboptimal or inherently self-contradictory, people may still hold it. It is unclear if the ultimate goal of such political maps is to chart the space of what people claim to believe or what is political viable.

While this model is intended to be generic it does have different relevancy for different historical contexts. This is most relevant for the Telos of Tradition. To be tied to a particular tradition could imply that the type of tradition could be anything. In this context it does not mean that. The evolution of society came of out a specific developmental process. This model only makes sense in the political sphere from the 1700s onward and the is particularly relevant to the west.

It is instructive to consider the interplay of the people in society over time. It can be somewhat simplified to think of the three extremes in terms of power groups; Liberal, Conservative and Leftist. Starting in the 1700s there were several emerging schools of thought which pushed for change against the Conservatives. The Liberal Tradition started with John Locke though liberty minded individuals clearly existed before this. The Leftist tradition started with Georg Hegel and was particularly embraced by the Young Hegelians. Both traditions evolved, split and influenced each other all the time while the conservatives held back against this.

Typically the culture war is just between the two with the most power and the third is subordinate. In most electoral systems, Duverger's law helps to enforce this. In the west for most of the history the subordinate power was the Leftists and the cultural battle was between the Liberals and the Conservatives. The Liberals eventually won nearly all battles until the conservatives had ceded so much ground that the difference between a conservative and classical liberal was virtually nothing. The last major battle between liberals and conservatives was that of the atheism movement in the 90s. This whole time it was the Liberals and the Leftist against the Conservatives. However, due to the close relationship Liberalism was influenced by Leftism giving rise to Social Liberalism. Hard Leftism was largely kept at bay in the west with the cold war and McCarthyism but the ideological subversion of liberalism was happening under the surface. In the 2000s with the conservatives thoroughly beaten, the Leftists started to try to gain influence. With Liberalism as the dominant school of thought in the west and the conservatives now working to support that status quo, the schism was now between liberalism and authoritarianism. There was conservative push for change which lead to Neo Liberalism and a large rise in the power of the state. However by 2015 the Leftist ideology was the clear contender to liberalism and the conservatives were subordinate.

This narrative implies that the term "conservative" means something quite different the modern context. Conservatives are people who are cations of change temperamentally so at all times they will resist the change. Given that the dominant culture in the West is currently Liberalism, a conservative could be somebody who wants to keep liberalism. While a progressive would be somebody who would want rapid change away from the status quo. All this implies that the terms of Tradition and conservative used for one of the Teloses may be better served by the term Heirarchist used in grid group cultural theory.

Furthermore to this, there is a large dependency on the dynamics. People with differing position in the Three Telos Model will act differently depending on what the dominant ideology is, the rate of change and the direction of change relative to their position. For example the work of Karen Stenner has shown that Authoritarians (those low in the Telos of liberty) become much more authoritarian when there is social instability or their sacred values are threatened.

Retrieved from "https://electowiki.org/w/index.php?title=Three_Telos_Model&oldid=13935"
Categories:
Cookies help us deliver our services. By using our services, you agree to our use of cookies.