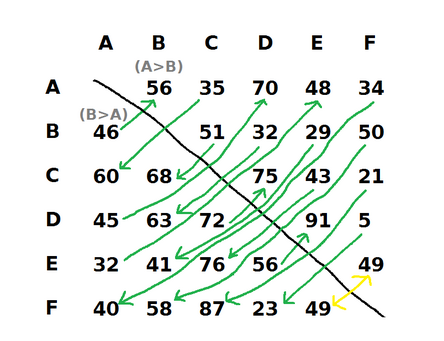 Green arrows point from the loser of the matchup to the winner (based on who got more votes). Yellow arrows indicate a tie. Red arrows (not shown here) indicate the opposite of green arrows (i.e. who lost the matchup).For example, the B>A matchup points to A>B with a green arrow because A pairwise beats B (wins head-to-head).

Pairwise preferences are voters' preferences between pairs of candidates (their preferences in head-to-head matchups between candidates). Pairwise counting is used to extract this information from voters' ballots, and it is then used in all Category:Pairwise counting-based voting methods, which are mostly just the Condorcet methods, to help determine the winner of the election.

A pairwise matchup is when voters choose between two candidates, with there being a winner and loser, or a tie (the possibility of which will only intermittently be discussed throughout this article). The idea is that when there are only two options to choose from, it's always possible to get a majority in favor of one of them, because any votes that don't go to one must have gone to the other. A major argument in favor of analyzing pairwise preferences is that it minimizes the ability of strategic nomination to affect the race, that is, Independence of irrelevant alternatives is maximally satisfied (though not completely, if using majority rule) by ensuring candidates who enter or drop out of the race play less of a role in deciding which of the remaining candidates wins.

The most direct way to conduct a pairwise comparison is to ask voters "Who do you prefer between these two candidates" for every pair of candidates. However, this would be rather onerous when there are more candidates running, and could even result in violations of transitivity: a voter could say they prefer A>B (A over B in the A vs B matchup), B>C, and C>A, which means that if these were the only 3 candidates in the election, and the voter had total power to decide which of them won, then they'd be unable to make up their mind, since for whichever one they choose, they'd want to pick someone else (in fact, when voters express these cyclical preferences on their ballots, the common approaches to making their preferences "rational"/acyclical are to either ignore the last or lowest part of the cycle, such that A>B>C>A becomes A>B>C, or to treat all candidates as equally preferred, i.e. A=B=C, though the noncyclical preferences the voter expressed in regard to these candidates versus other candidates are still respected).

Thus, in the context of voting, it's more common to ask voters to indicate their preference using a ballot type that automatically imposes transitivity, usually with a ranked ballot (though rated ballots are also sometimes used; theoretically, any ballot type that allows a voter to indicate at least one pairwise preference works for this purpose). The use of a transitive ballot type has the further advantage that, because it is usually assumed a voter prefers every candidate they mark a preference for over every unmarked candidate, voters don't have to explicitly mark all of their preferences.

Identifying the winner of the matchup[edit | edit source]

The following terms are often used when discussing pairwise preferences:

This section covers how to demonstrate pairwise preferences.

Sometimes only the "dominance relation" (wins, losses, and ties) is shown, rather than the exact numbers. So for example, if A beat B in their pairwise matchup, it'd be possible to write "Win" (or a green checkmark) in the A>B cell and "Loss" (or a red X) in the B>A cell.

A pairwise table may be demonstrated either vertically or horizontally; that is, for the following horizontal table:

it could also be written vertically as

It may help to interpret pairwise data by putting the % of the votes a candidate got in the pairwise matchup. So, for example:

Here is an example of a pairwise victory table for the Burlington 2009 election:

In the context of Condorcet methods:

Cardinal methods can be counted using pairwise counting by comparing the difference in scores (strength of preference) between the candidates, rather than only the number of voters who prefer one candidate over the other. See the rated pairwise preference ballot article for a way to do this on a per-matchup basis.

Essentially, instead of doing a pairwise matchup on the basis that a voter must give one vote to either candidate in the matchup or none whatsoever, a voter could be allowed to give something in between (a partial vote) or even one vote to both candidates in the matchup (which has the same effect on deciding which of them wins the matchup as giving neither of them a vote, as it does not help one of them get more votes than the other).

Note that pairwise counting can be done either by looking at the margins expressed on a voter's ballot, or the "winning votes"-relevant information (see Rated pairwise preference ballot#Margins and winning votes approaches).

For example, a voter who scores one candidate a 5 and the other a 3 on a rated ballot can either be thought of as

For ranked and choose-one ballots, both margins and winning votes approaches yield the same numbers, since these approaches assume a voter gives either:

Pairwise preferences can be used to find the order of finish of any Condorcet method when there is a Condorcet ranking, and can always be used to calculate a complete result in Category:Defeat-dropping Condorcet methods. They can sometimes be used in Category:Runoff-based voting methods to avoid having to do additional rounds of counting (i.e. because no matter which candidates enter the runoff, the result is already known).

When combined with rated information, it is possible to surmise some additional information about how voters scored the candidates. For example, if 2/3rds of the voters prefer A>B, yet B has a higher points total than A, then the A>B voters must have received less than half the utility gain of going from their less-preferred candidate in the matchup to their more-preferred candidate as the B>A voters.

One major criticism of pairwise preferences is that they are harder to understand and think about because a candidate's quality can't be completely summed up into one number, like in cardinal methods.

Another criticism is that it can be harder to do pairwise counting than it is to count the vote in other methods, such as Approval voting. The Rated pairwise preference ballot#Rated or ranked preference implementation can potentially mitigate this criticism, because for every voter who indicates a rated preference, at most only one piece of information need be collected from their ballot for every candidate they marked (their score for the candidate), rather than several pairwise preferences.

The nature of pairwise preferences prevents direct comparisons of candidates from two separate elections, unlike with rated methods or other methods. For example, it is possible to compare Reagan's approval rating in polls from the 1980s to Obama's in the 2010s without having to ask voters about both in the same election/poll, but their pairwise matchup against each other can't be evaluated like that.

The rated pairwise preference ballot allows the voter to express the most nuanced pairwise information of all ballot types.

The interpretation of pairwise ties can conceptually link different concepts together sometimes. For example, the Smith set and Schwartz set are identical except that one treats a tie as counting against both tied candidates (i.e. it's as bad as a defeat) in terms of their deservingness to be in the set or not, while the other treats a tie as having no relevance to the quality of either of the tied candidates.

One of the notable aspects of pairwise preferences is that a Condorcet winner or member of the Smith set can be found in a simple manner without needing to be done with written ballots; for each pair of candidates, the voters can be asked to raise their hands for the one they prefer, with the pairwise loser being eliminated, and this repeating until only one candidate remains. This rivals the simplicity of Approval voting for casual usage purposes, since a relatively similar amount of work is done both ways, though it can create failures of transitivity. See Category:Sequential comparison Condorcet methods for more information.

Pairwise preferences can be used to understand Weighted positional methods and their generalizations (such as Choose-one voting, Approval voting, and Score voting), and Category:Pairwise counting-based voting methods. In the first 3 methods, a voter is interpreted as giving a degree of support to each candidate in a matchup. Even IRV can be understood in this way to some extent when observing its compliance with the dominant mutual third property.

Pairwise preferences require (N^2 - N) pieces of information for N candidates. This is because each candidate can get a different number of votes in favor of then in each of their matchups against other candidate, resulting in 0.5*(N^2 - N) matchups. See also Precinct summability.

Most pairwise criteria (Condorcet criterion, Smith, etc.) assume a voter may indicate as many transitive pairwise preferences as desired i.e. they may place each candidate in a separate rank. Some Category:Pairwise counting-based voting methods actually violate this by limiting the number of slots voters have, such as common implementations of Smith//Score. This can be done for practical reasons (to keep the ballot smaller, potentially, or to limit the amount of vote-counting work necessary, since generally matchups between candidates at the same rank do not need to be counted), or for more philosophical reasons; some object to the idea that a voter should be able to put a full vote "between" every transitive pair of candidates (because it may be unlikely for voters to honestly feel such maximally strong preferences), and so wish to limit the number of available ranks. Indeed, when a voter can only indicate two ranks (or also give candidates partial support between these two ranks), then you get Score voting, because if you give 1 vote to help A beat B, then you must give 0 votes for B>C (or if you give 0.6 votes A>B, then you can't give 0.5 votes B>C). The Rated pairwise preference ballot can be implemented with fewer ranks than candidates in this manner, which then forces preference compression (or, more complexly, no, or a less strict, limitation on ranks might be imposed, but the voter might be required to indicate a weak preference between at least some of the ranks).

Because of preference compression, which can happen also for strategic voting purposes i.e. Min-max voting, it's not always possible to get accurate pairwise data from rated ballots. Thus, it is often useful to differentiate between a candidate who gets at least half of all voters to prefer them over their opponents in head-to-head matchups, rather than only at least half of all voters with preferences in the relevant matchups (i.e. they tie or Majority-beat their opponents), since no matter what preferences preference-compressing voters have in those matchups, the candidate in question will at least tie or win the matchup no matter what. Example:

Here, the CW based on honest pairwise preferences is B, but because of min-max voting (potentially done to ensure at least one of A or B enter the runoff rather than both C and D), it looks like A is the CW.

When looking at two candidates, a quick way to figure out the number of votes for the first candidate>second candidate and vice versa is to first locate the cell for "first candidate>second candidate", count the minimum number of cells diagonally one must go to be adjacent to the middle dividing line of the matrix (where there is a --- cell), and then going one cell further diagonally (meaning you'll be starting from the closest cell on the opposite side of that dividing line), go that number of cells further diagonally to reach the other cell. For example:

Retrieved from "https://electowiki.org/w/index.php?title=Pairwise_preference&oldid=11241"
Category:
Cookies help us deliver our services. By using our services, you agree to our use of cookies.